In this world that is at war against God, we need testimonies to fuel our faith and build our hope for the coming generations. Good & Faithful Servant, is a compelling and inspiring biography of one theologian who, like the Apostle Paul, changed the world with his God-given message. 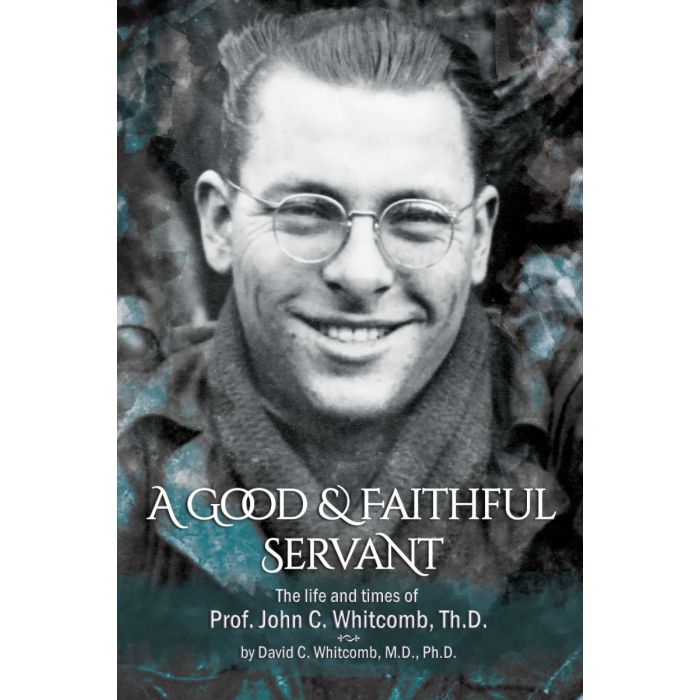 A Good and Faithful Servant

God uses ordinary men and women to change the world. In this inspiring biography of a 20th century hero of the faith, you will gain an outstanding mentor for your Christian life. Good and Faithful Servant is the story of Dr. John Whitcomb, a veteran of World War 2, who embarked on a relentless pursuit of biblical and scientific truth.

Even though Whitcomb was steeped in evolutionary philosophies while at Princeton, he became a revered theologian who preached the literal biblical account of Creation. What seemed like a long-lost battle over origins and evolution was overturned as this man walked humbly, yet boldly with God.

“People will look back on this time in history, and just as we think about greats like Martin Luther, John Calvin, John Wesley, George Whitfield, and others, they will talk about Dr. Whitcomb.” — Ken Ham

Dr. Whitcomb is widely known as the co-author of The Genesis Flood which was used by God to ignite the modern creationism movement. This biography tells of his personal heartache, his influences, and his enduring faith in action. Written by his son, this book is filled with accurate accounts and many personal stories and photographs.

Families, clergy, and scholars alike will find life-changing wisdom in the life story of this good and faithful servant who sought to defend the accuracy of God’s Word in the face of widely accepted, though ultimately flawed, science.

“There has been no more loyal defender of the literal interpretation of Genesis than Dr. John C. Whitcomb. He poured out his life in service of Scripture and trained many of our professors at The Master’s Seminary. I am eternally thankful for his legacy and I gladly recommend this biography."

“Intellectually, Dr. Whitcomb was in a realm that was high up in the sky, far above everybody else except for a few brilliant scholars. But he also had the gift of teaching because when he preached, he was able to take these lofty, complex truths, bring them down to earth, and making them clear, applicable and exciting to everyone.”

“The Apostle Paul said, ‘Imitate me, just as I also imitate Christ.’ Dr. Whitcomb is one of the few men who could also say these words. But because he is a very humble man, he would simply say, ‘Follow Christ!’”

More Information
Reviews 22
Write Your Own Review
Only registered users can write reviews. Please Sign in or create an account