Take an amazing tour through the pages of this book as the world’s true history is shared through unique, world-class exhibits. Experience the reality of Noah’s Ark, an immense wooden ship built to biblical dimensions to survive the violent forces of the global Flood. See common-sense solutions that would have enabled eight people to care for the animals. Discover the Ark’s remarkable animal kinds, based on a multi-year study of both living and extinct creatures.

Now experience a special overview of the 120,000-square foot Ark Encounter that includes:

Far from being a fairy tale or a myth, the Ark Encounter challenges believers to realize that the Book of Genesis accurately records the history of real events. Every inch of this timber-framed structure challenges the secular attacks on Scripture. Featuring designs based on clues from ancient cultures, the Ark Encounter brings the biblical account to life and shows that humanity does have its roots in the courageous, faithful family that trusted God. 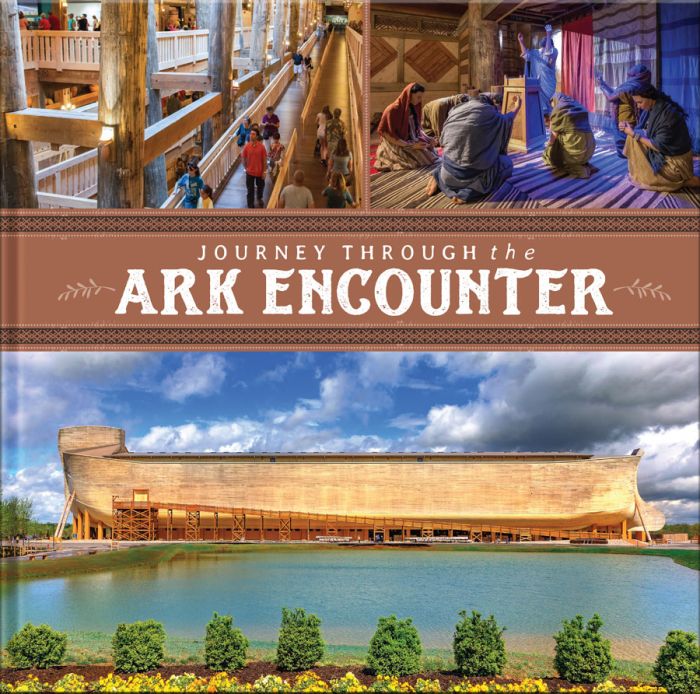 Step back in time and explore one of the best-known biblical events at the Ark Encounter!

Be transported back in time to meet Noah and his seven other family members, who lived aboard the Ark and cared for all the animals during the Flood. See what their living quarters may have looked like, what they could have brought on board, and even what kinds of clothing they wore.

At 510 feet long, 51 feet high, and 85 feet wide, Noah’s Ark stretched an American football field and a half long. The Ark built in Kentucky is the largest timber frame structure in the world, built from standing dead timber, in part by skilled Amish craftsmen. It is an architectural and engineering wonder containing three decks of world class exhibits. Whether or not you have visited the Ark Encounter, this book will guide you step-by-step through this faith-affirming wonder. Many of the animals that lived during Noah’s lifetime didn’t look much like the animals we see today. Prepare to have your expectations challenged by a host of incredibly lifelike sculpted animals, along with exotic live animals from around the world in Ararat Ridge Zoo. Plus, you’ll learn how Noah could have cared for all the animals and how the Ark was big enough to fit them all on board. See what is being called the “eighth wonder of the world.”