A detailed account of the troubled history of religious persecution between the 16th and 18th centuries that occurred in England is presented, and then undertakes a thorough exploration of the ideas and the sacrifices that helped to create religious liberty in America.

Features: Each suggested weekly schedule has five easy-to-manage lessons which combine reading and worksheets. Worksheets and quizzes are perforated and three-hole punched — materials are easy to tear out, hand out, grade, and store. As always, you are encouraged to adjust the schedule and materials as you need to in order to best work within your educational program. Worksheets can be alternately used as class discussion questions rather than short answer.

Workflow: Students will read the pages in their book and then complete each section of the course materials. Quizzes to demonstrate understanding of the material and critical thinking skills are given at regular intervals with space to record each grade. Younger students may be given the option of taking open-book quizzes.

Daily Schedule: Includes a suggested daily schedule for the course. Space is given for assignment dates. There is flexibility in scheduling for the educator.

Quizzes/Exams: The course includes six quizzes – one after every four chapters – as well as a final exam in the form of an essay question. Answer keys are included for both worksheets and testing materials.

Time: Approximately 30 to 40 minutes per lesson, depending on allowed discussion time 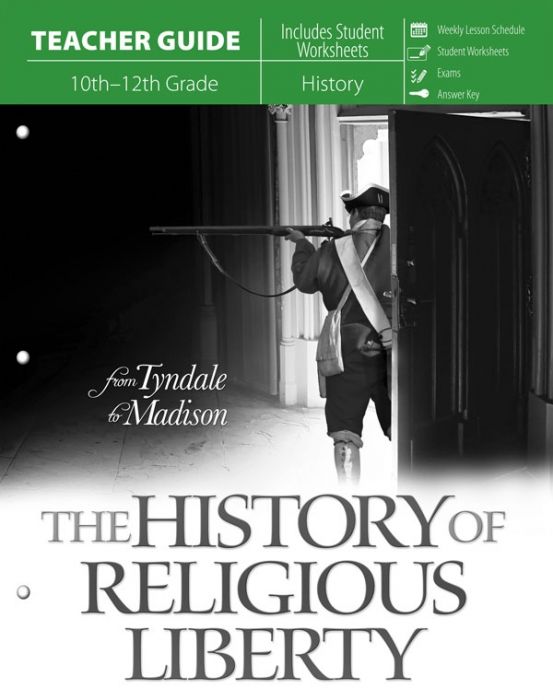 In America we enjoy an astonishing range of freedoms compared to other countries in the world. With Christian churches dotting almost every corner in communities across the nation, it is hard to remember there was a time that religious liberty was a heartfelt dream and a cause that many died for.

The History of Religious Liberty presents a detailed account of the troubled history of religious persecution between the 16th and 18th centuries that occurred in England, and undertakes a thorough exploration of the ideas and the sacrifices that helped to create religious liberty in America. With clarity and honesty, the book reveals that some giants of the faith were religious persecutors, but that is just one part of a much larger and important perspective. The true birth of religious liberty is found in the simple and courageous stories of those who lived and died believing God is the author of liberty!