Most people think of Noah as the man who built a large ship and spent months caring for thousands of animals. But who was he and what events shaped who he would become?

Packed with action, adventure, and heartbreak read all about Noah and his life in this great trilogy.

Disclaimer: These books demonstrate the immoral lifestyle during Noah's time including promiscuity, witchcraft, idolatry, child sacrifice, martyrdom, and other sinful situations. We recommend this book for 11th grade and up. We also advise parents to read the books before giving them to their student. 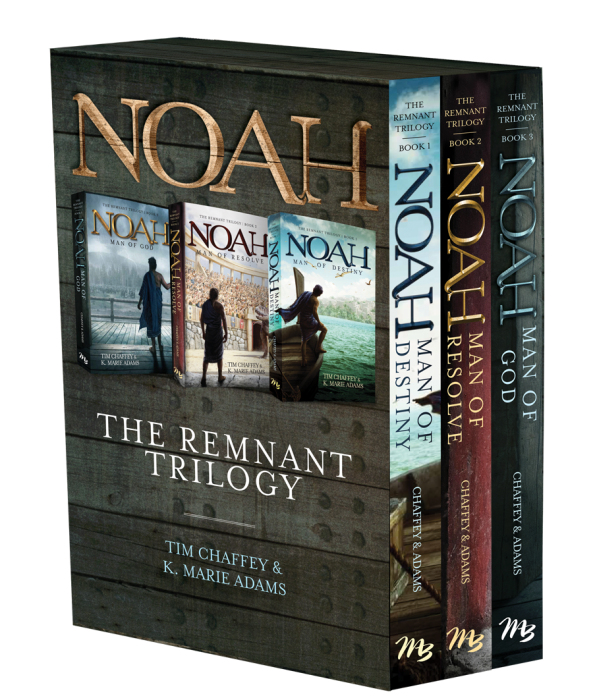 Noah: Man of Destiny - Most people think of Noah as the man who built a large ship and spent months caring for thousands of animals. But who was he and what events shaped who he would become? We wrote this novel to challenge Christians to look closely at the life of a man who walked with God. Noah: Man of Destiny takes readers on a captivating, coming-of-age journey through the pre-Flood world. Noah learns more about the Most High while standing against a sinister belief system emerging throughout the land. Whether escaping legendary beasts, tracking kidnappers, or pursuing his future wife, Noah acquires the skills he will need when God calls him to his greatest adventure: surviving the global Flood. Discover the rich background of Noah and his family members as portrayed at the Ark Encounter. Witness the struggle of a righteous man’s battle against a culture that thought of evil continually. Explore what it may have been like for a righteous man to relate to God before the Bible was written.

Noah: Man of Resolve - Packed with action, adventure, and heartbreak, the second installment of the Remnant Trilogy continues the imaginative and respectful look at the life of this hero of the faith as God shapes him into the man who eventually saves humanity’s future. As wickedness increases across the land, Noah and his loved ones endure painful consequences of a world bent on evil. King Lamech expands his rule through deception and force, but does his kindness toward Noah hint that things may change? Noah and Emzara explore their world and their eyes are opened anew to the creative genius of the Most High, yet mankind’s wretchedness threatens to upend their peaceful corner of the world. While tracking down the perpetrator of a malicious crime, they are tested by tragedy and must decide if they will sacrifice everything for truth and justice. After years of serving God, Noah reaches a crisis of faith due to his mounting frustrations with the proliferation of sin and the apparent silence from the Creator. Thrust into a series of perilous situations, Noah’s deepest convictions are challenged. His response will direct his course and change the world forever.

Noah: Man of God - The world is inundated with violence and headed for destruction. Following his desperate flight from the clutches of Havilah’s wicked rulers, Noah finds himself caught in the middle of warring empires: the forces of Havilah, led by their evil king and priestess, battle the barbaric Nodite army for supremacy. Facing a decision that may cost loved ones their lives, Noah must find a way to escape the conflict to reach Emzara and fulfill God’s calling. Seeking a safe place to build the Ark far from his enemy’s reach, Noah leads his group to the last place he thinks anyone would look. Encountering numerous surprises along the way, he discovers that someone else has already planned for his arrival. As the Ark nears completion and judgment looms, Noah makes one more trek through a world dominated by deadly deceptions. Aided by an unexpected stranger in a perilous place, Noah learns once again that the Creator always keeps His promises. Adventure, wonder, and biblical history await readers on this riveting journey through the pre-Flood world, leading to an epic confrontation between the Creator’s faithful preacher of righteousness and the serpent’s priestess and her legions of darkness. Noah: Man of God weaves together the storylines from the first two books and delivers an unforgettable conclusion to The Remnant Trilogy.

More Information
Reviews 8
Write Your Own Review
Only registered users can write reviews. Please Sign in or create an account